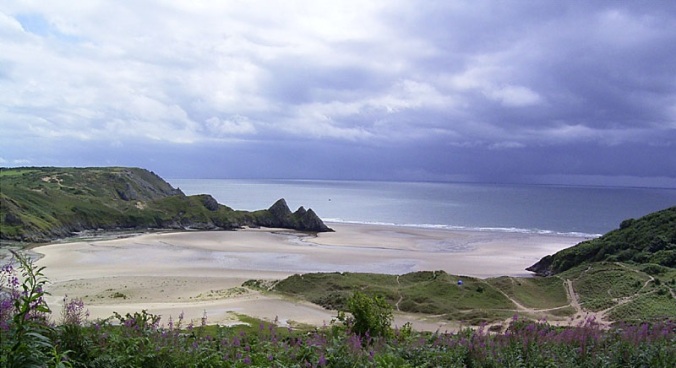 “Here we are then! Look how lovely, while it lasts, the empty beach, the bend of bay and swerve of shore, sure. Let them strip to their knickers and run laughing into the sunlit surfeet splashing…” (Loseable Paradises, possible ending)

This is surely one of the most memorable views in South Wales- Three Cliffs Bay, on the Gower Peninsula; and the quotation from Loseable Paradises includes a reference to the one of the most memorable parts of Finnegans Wake, the first sentence (which I have to admit is as far as I got for many years!) It isn’t really an opening, of course- the book’s apparent first sentence is famously a continuation of its last one; and earlier in that “final” section of Loseable Paradises I wrote: “The serpent eats its own tale. Linearity only one among many constructional functions.”

I spent a lot of time in South Wales on outdoor education courses when I was working at Gosford Hill School in the 80s and 90s. The centre we used to stay at was on the Gower Peninsula, and I came to know it well, and to love its beautiful, varied landscape. We walked the hills, climbed the cliffs, and paddled round the coast in canoes; we even donned caving gear and grovelled our way into its secret interior.

It seemed to me to be a magical place, and I wanted to write about it. I also wanted to continue the story of Cyn and Buzz (as I mentioned in the my last post) so it made sense for them to make their way from Oxford to Wales and end up stripped to their knickers on a beach in Gower, running “laughing into the sunlit surfeet splashing…” (That word “surfeet” isn’t a typo, of course- it’s surf + feet = surfeit; a surfeit of sunlight, of splashing.) But I suppose the desire to explore my feelings about the landscape was stronger than my desire to tell their story. As Russ Hoban had pointed out (previous post) I was still more interested in my own technique than in telling a story which a reader might be able to enjoy; but that’s enough self-flagellation for now!

The next big thing in writing during the 90s was going to be the hypertext novel. Even before the internet got going properly, there had been CD-ROM based hypertexts, and it looked to me to be the way ahead. If it didn’t particularly matter in which order events were narrated- and it didn’t seem to at the time- then all I had to do was put more or less related chunks of writing on different pages, drop in a sprinkling of hyperlinks, and there you go: structural problem solved. Or avoided, if the truth be told… Still, there were interesting ideas to play with: the use of pictures, coloured backgrounds, hyperlinks to completely different sites; some pages even had a musical accompaniment. I was pleased with it at the time: it even got noticed by a couple of websites catering for hypertext fans, hypertextuals or hypertextualists I suppose we could call them…

The original website with Loseable Paradises ceased to function some time ago- but I’ve rescued some of the pages from old back-up folders and put them together roughly on my new website just in case anyone’s interested. You can pick or click your way through some of it here. (Might be good idea to bookmark this page first, in case you get lost!)

The next post will be about Welsh magic and Dragon Girls, and unsuitable for those of a nervous disposition… you have been warned!