On page 619 of James Joyce’s Finnegans Wake we find:

“Crossmess parzel” is simultaneously a crossword puzzle and a Christmas parcel which the reader must attempt to solve and unwrap. The solutions to the puzzle may seem straightforward for those who have ears to hear: “urogynal” clearly sounds like “original”: but there’s a lot more to unwrap. The Latin “uro” means I burn, and the Greek γυνή (gyné) means a woman; “urogenital” (relating to or denoting both the urinary and genital organs) isn’t far away in terms of sound. But what on earth does it mean?

I don’t think the meaning of Finnegans Wake  is as important as the quality of engagement it offers to the reader. I started out as a composer, and I’m fascinated by the parallels between the way I was taught to work with sound and the ways Joyce works with words. To take an extreme example, John Cage’s 4’33’’ (the notorious “silent” piece) demands that the listeners be prepared to structure their experience of sound during its performance, to be, in a sense, composers themselves: in reading Finnegans Wake, a similarly creative attitude is necessary. There is no absolute meaning in the text: what it means to any individual reader is exactly the associations thrown up for them at the time, the memories triggered, the feelings evoked as they read. Of course, any text is going to evolve in the reader’s mind over the years- one of the joys of literature is revisiting familiar works with more experienced eyes- but Joyce’s achievement was to make that participation in the evolution of meaning, that happy recognition of connections, the very stuff of his technique.

At more or less the same time as Joyce was beginning to work on Finnegan’s Wake, Ludwig Wittgenstein was finishing his Tractatus Logico-Philosophicus with its famous phrase “the limits of my language are the limits of my mind.” Joyce was pushing hard at those limits, widening what written English could be to such an extent that it became almost incomprehensible as narrative and transformed into something else, something- it seems to me- much closer to music. As a young composer in my early twenties, I didn’t have the reading experience to do much more than scratch the surface of Joyce’s work, but I had the feeling it was going to be important to me one day. When I started writing seriously a couple of decades later, I found myself producing a sort of parody of the  Finnegans Wake style: in retrospect, it’s obvious that I was doing this because it enabled me to bring the reader close to what I wanted to say, without actually saying it… shame did burn, as my pseudonym Shamus Byrne, a Joycean enough invention, used to say.

This technique of hiding behind obscure references and Finneganesque coinages got its comeuppance in the end from Anthony Burgess, whom I admired for his books on Joyce- Here Comes Everybody and Joysprick- as well as his novels. In 1990 I sent him- unsolicited!-   the typescript of Loseable Paradises, my first attempt at novel length writing, and he was kind enough not only to read it but to send a letter back which put me back on track, firmly but very generously: 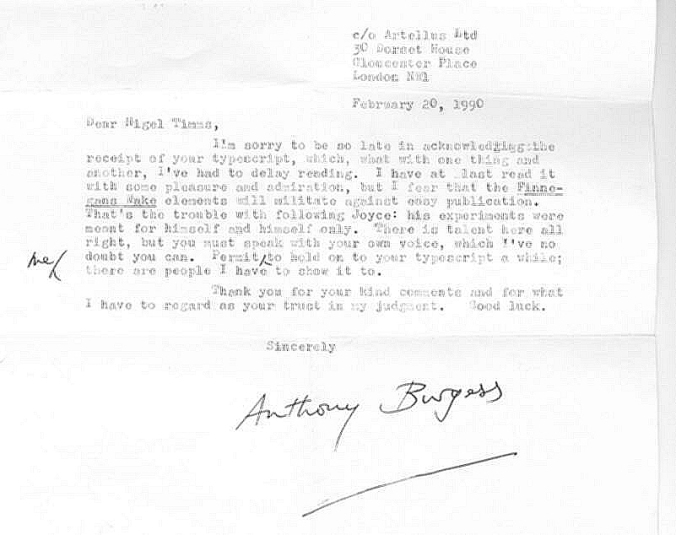 I’ll have more to say about what happened to Loseable Paradises, and the huge debt I felt I owed to Anthony Burgess, in a future post. And I’ll unwrap a little more of my personal crossmessparzel too.